skip to main | skip to sidebar

Where have you been?

Consider running into a friend you haven't seen for years and trying to catch up on all the life that you've missed with each other in a few brief sentences. Pretty much impossible, but that's what this blog post feels like. Where have I been for the past six years or so? The easy answer is  that I've been doing normal life things like everyone else. The detailed answer would take a little more time. These are the highlights.

• One daughter joined the Air Force and became active in the scouting program
• One daughter completed Bible college, became a second degree black belt and will soon be traveling to Korea, and began college for speech therapy
• Son graduated from both high school and Bible college (Colorado), became a first degree black belt and will also be traveling to Korea, and relocated to Florida
• One daughter completed high school and started college (theatre and business)
• We bought a house and moved
• Hubby started a job he loves working for Tractor Supply (his dream company to work for)
• I started a face painting/air brushing business
• I taught Math, Algebra, and Statistics (and Pre-Calc temporarily) at a Valeo Academy for two years

There are probably other things that happened along the way, but those are the main ones which come to mind. I didn't finish any books, but I did a fair amount of art and writing, primarily turned in the direction of children's ministry or making math, algebra, and statistics humorous and fun to learn. I'm not sure I achieved the fun to learn part, but I tried. Cartoons and crazy problems can't hurt. Some of my favorite memories from the past years involve my time at Valeo teaching math. I think I missed my calling, but there are so many things I love to do that it's really hard to choose which to devote my time to.

Anyway, that sums it up a little. So how are things with you? 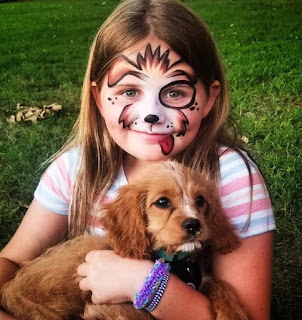 Posted by Beth MacKinney at 7:41 AM 0 comments 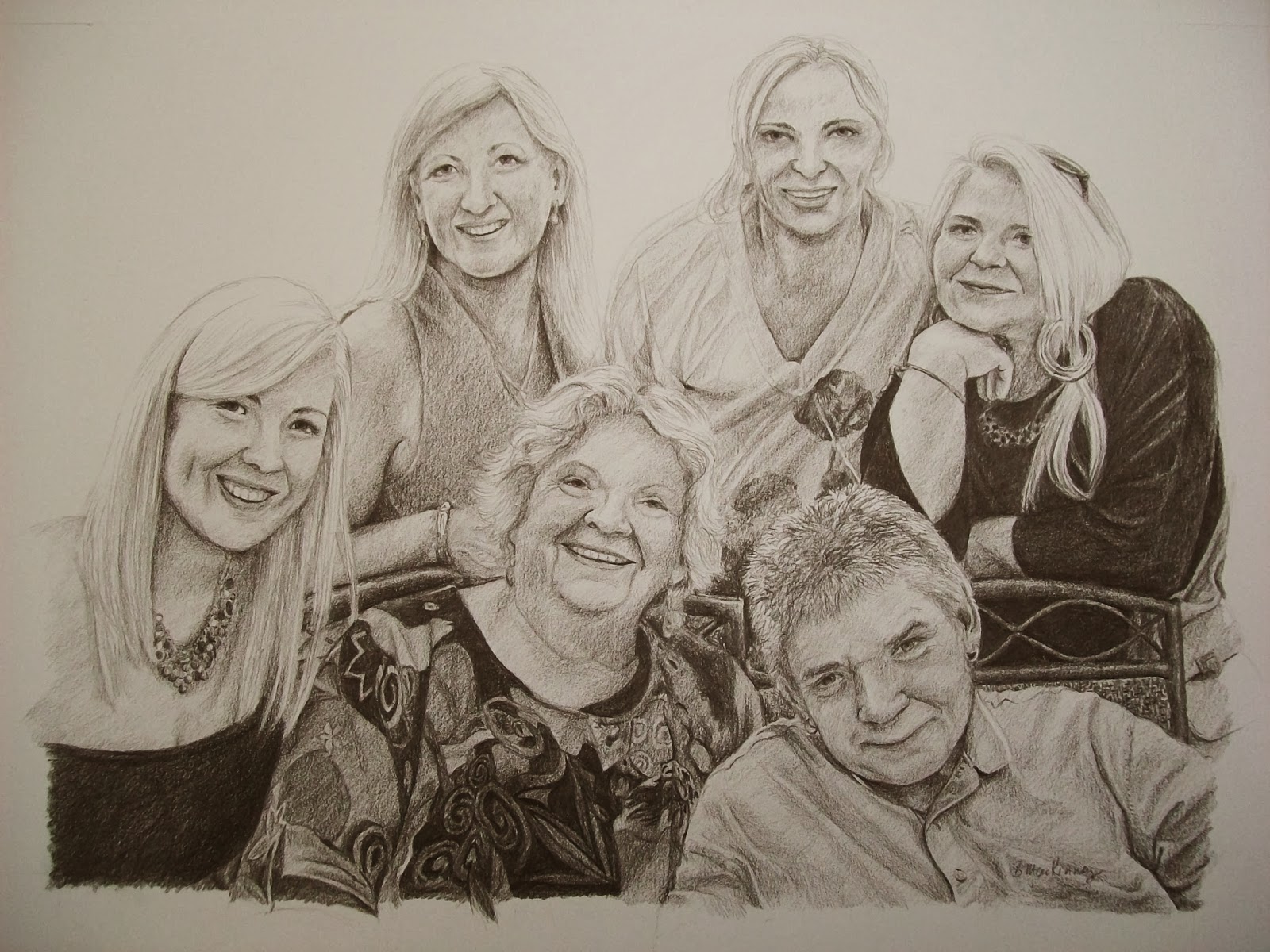 This was the first time I had put more than two people in a portrait,
so it was a little challenging, but I like the way it turned out. 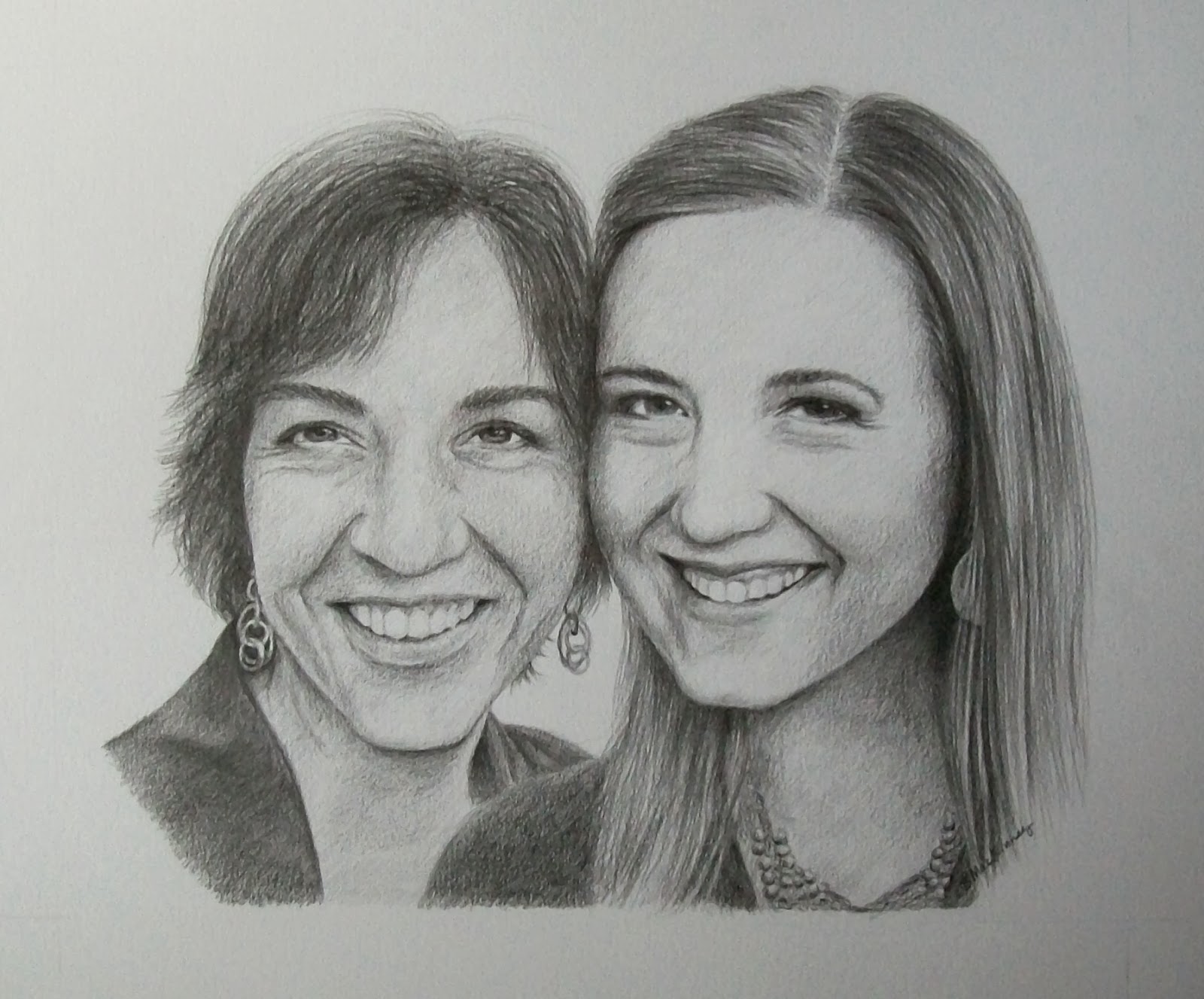 This one had its own challenges in that I had to combine two photos to make it.
That's always a little tricky because of where your light source is, but it turned out great.

Do it yourself stencils for face painting

I have to admit it. I'm kind of a do-it-yourself person when it comes to most things. Possibly that came from having frugal parents, who were also do-it-yourselfers. We lived on a farm, and many times you just had to do-it-yourself to get the job done.

Whatever the case, when I looked at stencils as a face painter, I knew I'd love to try them out, but having invested quite a bit lately on equipment and paint, I couldn't invest more (approximately $2.50 or more each) on something I wasn't sure I'd use a lot, especially if they were small pieces of plastic which I could somehow make on my own from materials at hand.

So yesterday I pulled out some Medium Weight Dura-lar overlay film from my college days art supplies and decided to give making my own stencils a go. If you'd like to try it yourself, here are the instructions.

First cut your large sheets of overlay film into rectangles of about 3.75 x 3.25 inches using the cutting mat, X-acto knife, and metal ruler. Be careful. Overlay film is slick, yet the X-acto knife tends to stick a little. Scoring it lightly and then going back over it works well. Always keep the non-knife hand well out of the way while cutting. When cutting freehand, cut away from your fingers rather than toward them. That way if you slip, you won't cut yourself. (This is an activity for adults only, since it involves a very sharp knife.) As an artist, I've been using this kind of knife for years, and about six years ago I had just the tip of my finger in the way as I sliced down the edge of a ruler. It was a painful lesson in being more careful and concentrating when using a knife.

Trim the corners with your scissor so they are nicely rounded. This is important, since overlay film corners are sharp, and you don't want to stab anyone you're face painting. Use a hole punch to put a hole in one corner. (Pick the same corner on each rectangle so you can later mount your stencils in a group on a metal ring from the craft store.)

Now you're ready to chose designs for your stencils. I started with something that looked organically reptilian for adding a little pizzaz to dragon skin, monsters, and snakes. Also, since the shapes were uneven, it was easier to hide errors in my first attempts at cutting. Draw your design on your overlay film with the permanent marker. If you don't like to draw, you can find a pattern you like from any visual source and put it under the film to trace.

Using the X-acto knife, score the shape you'd like to cut out. You don't have to go through the overlay the first time. I found it easier to score it and then go back to go through. You're less likely to slip and make a cut you don't want this way. Also, I found that it was easier to hold the knife still and turn the overlay under the blade to make curved cuts. Slow and steady will give you the best results, so take your time.

After you've removed your cutaway pieces, you're pretty much finished. Your stencil should be as usable as any other stencil available by purchase. When using it, experiment with light texture over dark and dark over light to see which colors you prefer. Enjoy!

Face painter alert! Be careful using your new stencils anywhere around a person's eyes. The rounded corners will help, but you should always use caution with any piece of equipment which is used around the eye.
Posted by Beth MacKinney at 7:25 AM 0 comments

I think I enjoy portraits because the human face is so amazing in it's range of expression. Here's my latest project, which I was working on today. While I'm working, I sometimes lose touch with the portrait as a whole, but in order to take this progression photo, I had to step back. I immediately noticed problems, which I'll have to correct tomorrow. Can you see them, too? 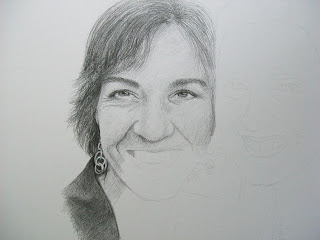 I've found that while face painting children, it's helpful to have a binder of designs for them to look at. I have a second binder which I use for myself if I need a reference for some reason. Here are some pages from my binder. 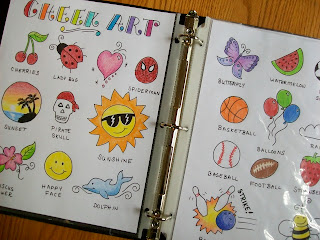 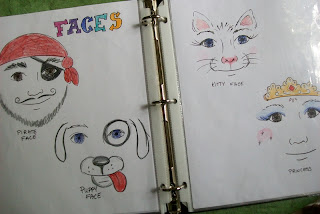 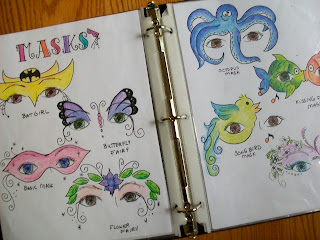 This summer started with a bang when we went to San Antonio for Kathryn's BMT (Basic Military Training) graduation.
Then we had a family reunion in northern Wisconsin.

Then we had Bible Camp at church. I was on the craft team this year. On the last day they had a blow up water slide, freeze pops, and an epic water balloon battle. (I missed the water balloon battle because I had to go look for something in the building, and that's when they started it.) 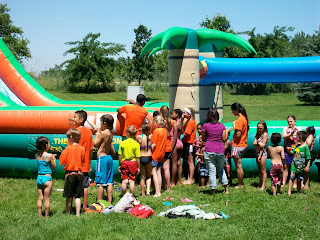 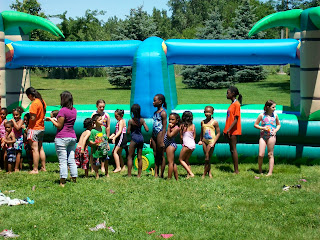 I wish the summers didn't go by so quickly!
Posted by Beth MacKinney at 7:35 PM 0 comments

If the walls could speak, they'd say, "Paint me!"

Here's what I've been up to. (Another new thing.) I'm doing some decorative painting in a nursery. I'll post pictures when it's entirely finished. (They're putting in new light fixtures, furniture, etc., so it should be beautiful.) 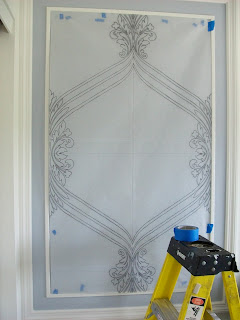 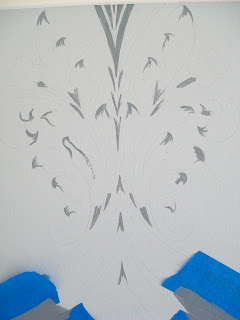 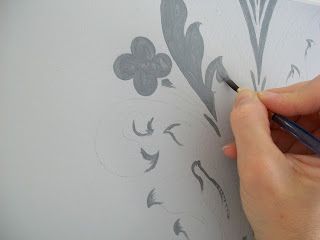 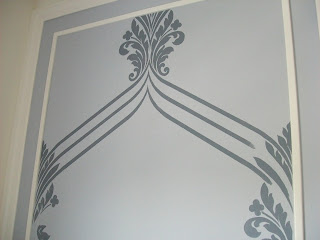 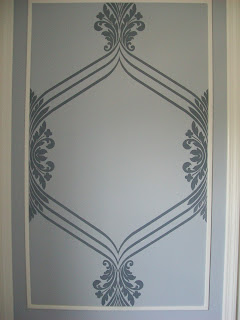 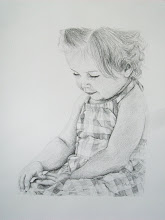 My favorite pictures to work on are pencil portraits of children. 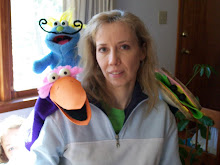 Horse by the fence 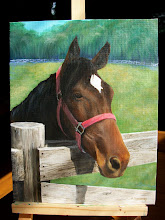 Yeah, I know. That's a lame title for a painting. Still, it's a beautiful horse. 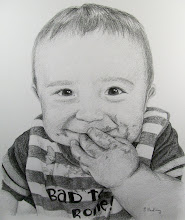 Add pizzazz to your next event! 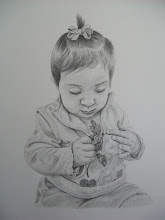 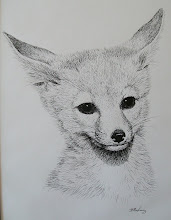 Pen and ink are also available. 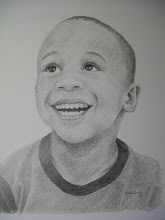 Close up of hands and leaves 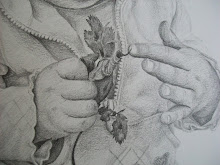 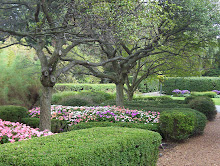 At Cantigny in September

Grandma and girls walking at the gardens 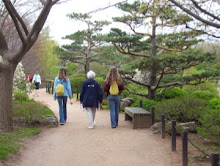 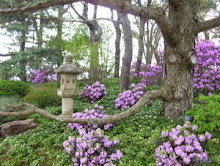 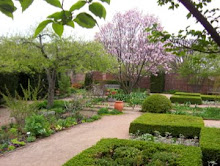 Join Tara Lazar and other children's writers for the 2012 PiBoIdMo Challenge.

At the writers' retreat 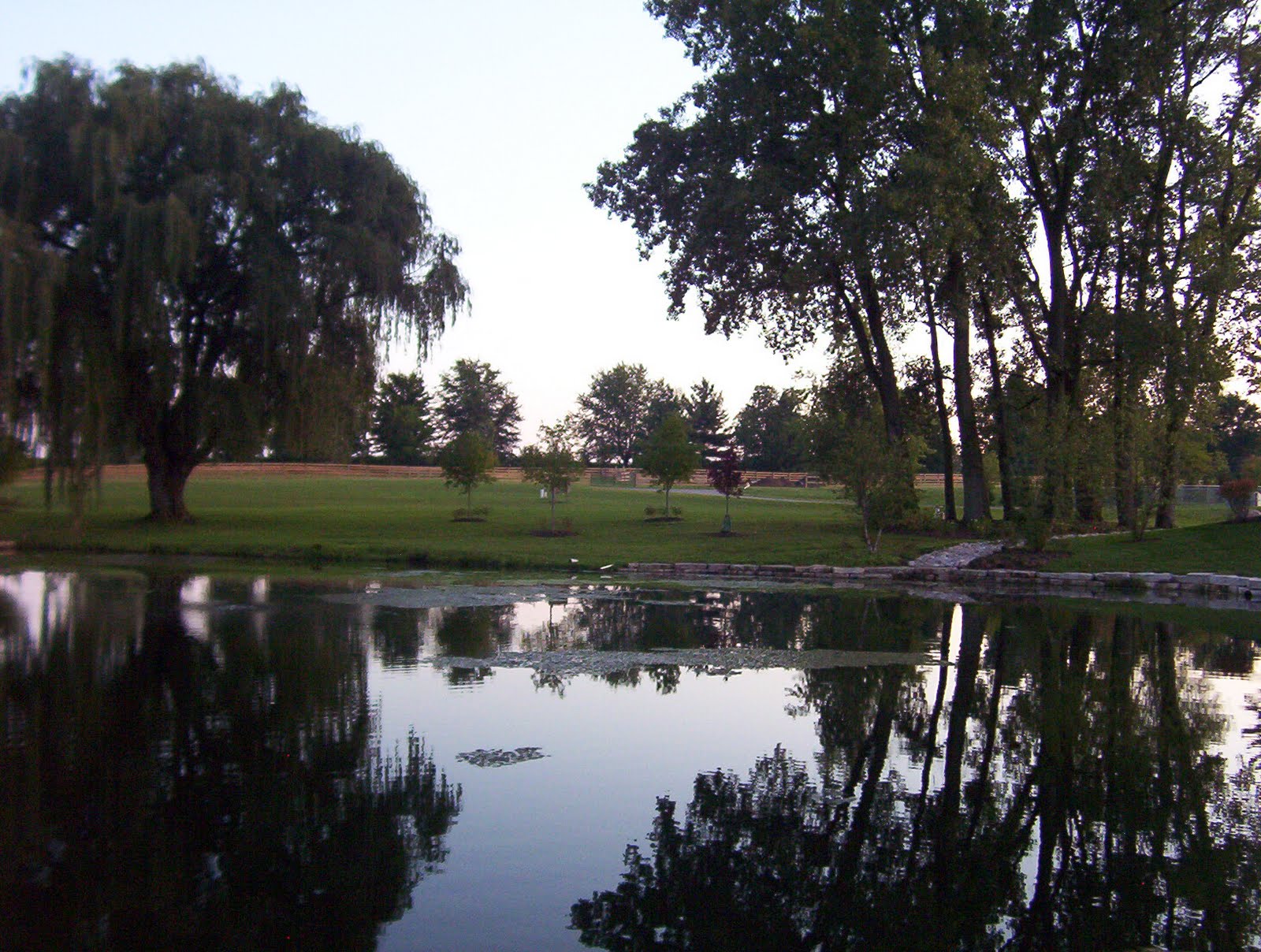